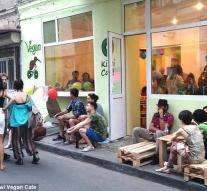 tbilisi - A vegan restaurant in the Georgian capital Tbilisi on Sunday attacked by a group of fifteen extremist meat fanatics. The supporters of the group pelted the visitors of the Kiwi cafe with pieces of meat and sausages.

The attackers are described by the newspaper Georgia Today as radical nationalists. The café called a provocation and called the group of neo-Nazis with fascist ideas. 'They grabbed grilled meat, sausages and fish and began to throw at us. '

When police arrived at the scene, officers believed that vegans themselves had caused all the uproar. He managed the cops rushed out to urge the extremists to remain calm. The police then decided to speak to staff and visitors to the cafe.


'Most of the staff has Mohawks and piercings, so they had some preconceptions about them,' said a witness on Facebook. 'We have to hope that the attack was recorded by security cameras. 'Another witness says that a policeman burst out laughing when he saw what had caused the meat throwers.