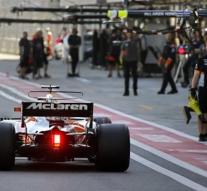 london - It's a dream of many people: racing for a real Formula 1 team. For a gamer that can be reality, because the Formula One team McLaren is looking for a virtual racer. The lucky one can test the F1 bolides for a year on the simulator.

McLaren launched a league, the World's Fastest Gamer, to find the new test driver. The winner will be awarded an annual contract at the rally and may call the official simulator driver. It will consult with the riders, at the headquarters and on circuits around the world. 'The winner really becomes an important part of our team. This is true: we absolutely need support on our computer platforms, 'said McLaren Director Zak Brown.

McLaren has set up a YouTube channel where the competition is to be followed. In the autumn there is a final, where ten drivers can show what they have in their march. They will race in multiple games and on multiple platforms.

McLaren is said to be the first F1 team to participate in eSports. McLaren already has three real test drivers. One of them is the 22-year-old talent Nyck de Vries from Sneek. The Frisian is in Formula 2.

McLaren has quarreled in recent years. The team did not win any World Cup point this year and in March 2014 it was the last McLaren driver on stage.