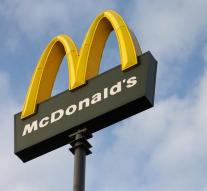 mannheim - The outsourcer of a McDonald's branch in the German Mannheim, which is about to close, has caused quite some fuss. To point his customers to other branches, he raised two signs on the facade. One in German and one in Turkish. The problem was that the Turkish board led the customers to a branch in a lesser district while the German board directed the britain towards a McDonald's in a better neighborhood.

'Is this serious?', Asks a twitter with Turkish roots. The affiliate's owner is accused of social media on racism and discrimination but speaks of a misunderstanding. He had not imagined that the signs could be understood, says Manfred Büch in German media on Wednesday. He hung a sign in Turkish with respect for his Turkish staff and guests.

After a couple of hours, the Turkish plate was removed after complaints.