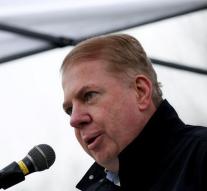 seattle - The mayor of Seattle Ed Murray, 62, announced his resignation on Tuesday, a few hours after being accused of sexual abuse of young boys in the seventies and eighties. That was all the fifth case. This time it would be a nephew who was thirteen years old at that time.

Although Murray denies all allegations, he has now decided to step up so his 'personal issues' will not prevent the leadership of a city council.

According to CNN, Murray leaves at 5.00 local time on Wednesday afternoon.