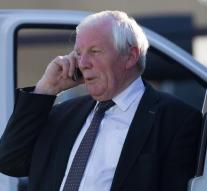 meskroen - The mayor of the Belgian Mouscron, Alfred Gadenne (71), was found dead in a cemetery. That reports Flemish media.

Gadenne lives directly opposite the cemetery and would close the cemetery every night. Monday evening it was completely wrong at around 20.00. He was attacked with a knife, so mention French-speaking sources. This happened just after an annual drink for Mouscron residents.

The police would have arrested a suspect. A press conference will follow later.