Home / World / Mayor London does not want to visit Trump 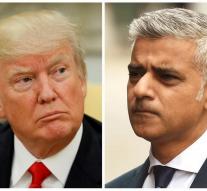 london - The mayor of London, Sadiq Khan, thinks that the state visit of US President Donald Trump must be resigned to Britain. He has asked the British government to delete the visit, The Guardian reports on Tuesday.

Reason for his request are the comments made by Trump about Khan after the London attacks on Saturday night. First, Trump twisted quite a bit about Khan saying that there was 'no reason for panic' while there were dead and injured. When the president was informed that Khan had condemned the attacks correctly and the remark was made out of his connection, he twisted that this was a 'sad excuse'.