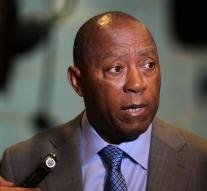 houston - The mayor of Houston called on the US government to provide financial assistance to its city and other affected communities as soon as possible. Sylvester Turner said at a press conference to prevent the municipality from advancing the money for relief efforts around the tropical storm of Harvey and to retrieve it later.

Houston was severely hit by the storm, which was accompanied by heavy rainfall. That led to water pollution in southern United States. The storm has cost a living for about 22 people since Friday. Tens of thousands of people sought safe shelter in shelters.

'People are angry and frustrated. They are wet and have to leave their homes. They want help yesterday, 'said Mayor Turner. 'I hope the people at the federal level, at the very top, realize that this was catastrophic. '