Home / World / May wants to go back to EU about 'backstop' 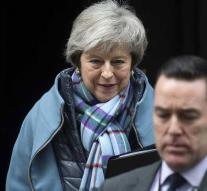 london - The British Prime Minister has confirmed that in its view the agreements with the EU on the departure of the United Kingdom from the European Union should be amended. She wants to go there with Brussels...

She can not otherwise be accepted by the parliament by a brexit deal. It concerns the settlement of the Brexit in the British part of Ireland (Northern Ireland), which has a border with EU member Ireland. This 'backstop' is in the existing agreement about the Brexit a thorn in the side of both advocates and opponents of the Brexit.

The EU has said that it no longer wants to change the text of the agreement. A British Conservative Member of Parliament, Graham Brady, has therefore already suggested 'an insert sheet'.