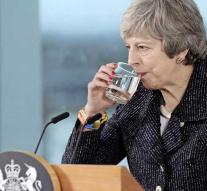 london - British Prime Minister Theresa May is planning to hold the second vote on her Brexit deal only at the end of February, one month before the official exit from the European Union. That writes The...

Julian Smith, the conservative parliamentarian who oversees the party discipline, has informed the cabinet that the vote is not next week, as expected, but in the week of 25 February, because May does not have enough time to negotiate a review of the agreement with Brussels. That is something that the EU still does not see.

Delays the government splits even further. With the 'remainers' the fear will grow that it will turn out to be a no deal.