Home / World / May: Trial after Election 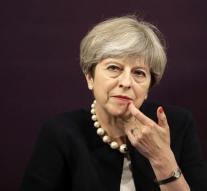 london - More than one month after the parliamentary elections in Britain, British Prime Minister Theresa May responded to the defeat of her Conservative Party in substance. 'I was broken and need a small tear,' said May on BBC radio on Thursday.

Spouse Philip informed May of the news. 'It was a complete shock,' she revealed. 'It took a few minutes before I realized what had happened. We did not see it coming. 'However, the Prime Minister has no regrets that she had declared early elections.

May lost her majority in the House of Commons last month. The Northern Irish DUP (Party of Democratic Unionists) now gives support to the British government. Although the defeat was heavy for the prime minister, she never thought it was her intention to step up.