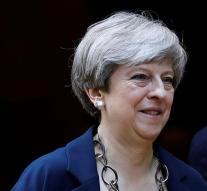 belfast - The Northern Irish Party DUP, which has ten seats in the British parliament, is still discussing with the Conservatives for support for a new government led by Prime Minister Theresa May. This has emphasized the party on Sunday. DUP leader Arlene Foster goes to London to speak to the Prime Minister on Tuesday.

Foster said to Sky New on Sunday that the conversations were going well, but still going on. Previously May employees had the impression that everything was in jugs and jars and May had a new cabinet on Monday. Some British media criticized this as 'political chaos and confusion'.

May wanted a large majority in parliament shortly before the start of negotiations with Brussels about the brexit. However, she suffered an election reduction on Thursday. The Conservatives now have 318 seats left in the 650-storey warehouse.