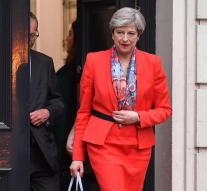 london - Although the elections have been unfortunate for British conservatives, Prime Minister May is not going to step up.

That reports sources to Sky News and the BBC.

The defeat for the Conservatives, who remains the biggest party at a distance, is being charged premier Theresa May personally. She took two months ago the decision to cancel interim elections. At that time her party stood in the polls. Due to May's little charismatic performance and a number of flaters during the campaign, the lead disappeared very gradually.

Labor leader Jeremy Corbyn sees the result as a reason for May to resign as prime minister. He thinks Labor, who won more than 30 seats, should form a government. However, no logical coalition is conceivable that would help the Labor to a necessary majority.