Home / World / May: No connection between the attacks 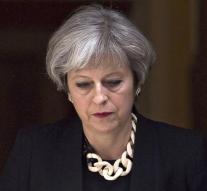 london - There is no connection between the terrorist attacks that Britain has hit in the last three months. That said British Prime Minister Theresa May Sunday at a press conference on the two attacks struck London on Saturday night.

Last week Monday, at a concert of Ariana Grande, 22 people were killed in a suicide attack. At the end of March, a victim in London had three victims. May claims that there is copy behavior. 'Terrorism inspires terrorists. The terrorist deeds do not have a direct link, but in common they have been committed from an evil ideology of muslim extremism, which hates preaching and disseminating divisions.