Home / World / May: Help after fire was not good enough 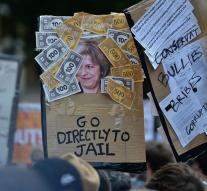 london - British Prime Minister Theresa May admitted Saturday that the immediate help for residents who needed care or information was 'not good enough' in the first hours after the fire in a London apartment. This she stated in a statement after she had spoken in her office with a delegation of the affected residents. May had already announced Friday that all residents should be housed in the neighborhood within three weeks.

'Victims are worried that their voice is not heard at all and that their many questions about this tragedy remain unanswered. That's why I decided to open a public inquiry, where the cost of legal aid for the victims comes at the government's expense, 'said the Prime Minister on Saturday. 'The research will be open and transparent. The government and all ministers involved fully cooperate. '

May announced that the researchers will issue her personal report. 'As a prime minister, I am responsible for implementing the results of the research. '

READ ALSO: The victims of Grenfell

She announced a five million pound emergency fund on Friday, allowing victims to buy clothes, food and other necessary products. 'This is now being distributed among the victims. If more money is needed, it will be taken care of, 'said the prime minister.

May suffered criticism on Friday because she had not shown her face two days after the flat fire.