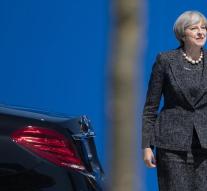 - TAORMINADe British Prime Minister Theresa May wants to boost the pressure on companies like Facebook, Twitter and Google. According to May, the Internet services do far too little to prevent harmful, extremist content from the web. The prime minister called the emergency clock ahead of the G7 summit and following the terrorist attack in Manchester.

May called in the Sicilian town of Taormina all world leaders to put more pressure on internet companies. In the future, they need to remove much faster and more often harmful information from their channels. May be the companies on their social responsibility. Now, according to her, there are far too many hate movies and messages that call violence online.

In Taormina, the leaders of seven major industrialized nations meet to discuss the foreign policy and security of citizens.