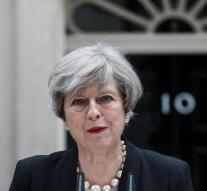 london - The attack in Manchester is the most terrible attack ever in the country's history. The perpetrator has blown an explosive in cool blood, aiming to make as many young victims as possible. 'This is what British Prime Minister Theresa May said on Tuesday for her office on Downing Street after an emergency meeting in Whitehall. May could hardly control her anger and called the act 'cowardly and repulsive.'

The prime minister said the assailant had an identity document and that his identity was known to the authorities. However, his name can not be confirmed yet.

May travels to Manchester where they will meet victims, police officers and rescuers. Then she returns to London for a second meeting with the crisis team.