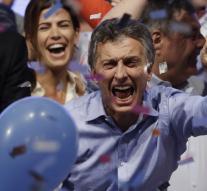 - Mauricio Macri of the opposition Republican proposal has won the Sunday presidential elections in Argentina. Daniel Scioli of ruling party Justicia List has recognized its defeat.

The National Electoral Commission announced after counting 66 percent of the vote knowing that a " trends " was to see that Macri will be victorious. After counting nearly all votes Macri 's profit came in at 51.5 percent. Scioli had to make do with 48.5 percent in the second and decisive round of the presidential elections.

The origin businessman Macri wants more bets on liberalization and an end to corruption. " This is the beginning of a new era which will bring us new opportunities which we need for growth and advancement ", Macri said in his victory speech. He will be sworn in December.

Over the past twelve years, the South American country was ruled by the couple Kirchner. First Néstor Carlos Kirchner (2003-2007) and then his wife and later widow Cristina Fernández Kirchner.