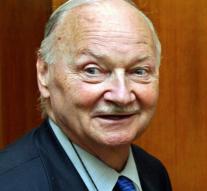 - On the eve of the climate summit in Paris is Maurice Strong, the founder of the Environment Program of the United Nations, deceased. He was 86 years old. UNEP reported that Saturday in a statement.

quote; Strong was one that the environment on the international agenda has put ", said UNEP director Archim Steiner. He also highlighted a call that Strong did last year during the General Assembly of the United Nations. " He called on world leaders to shoulder their responsibilities as custodians of the planet, rich and poor, north and south, east and west to bring together to secure our common future. We hope that these words will resound at the climate summit in Paris ", said Steiner.

The Canadian Strong was originally businessman in the energy sector. He also was the President of the World Economic Forum.