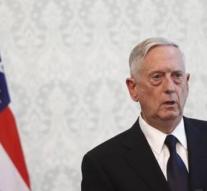 washington - US Secretary of State Jim Mattis (Defense) expressed his positive opinion on the nuclear deal with Iran. The United States, according to the governor, is pleased to hold on to the agreement unless it can be shown that the Iranians do not comply with the agreements.

Mattis responded when he was asked in a Senate hearing if he thought the agreement was positive for US national security. The minister expressed enthusiasm about the deal than his political boss, President Donald Trump. That called the atomic agreement with Tehran earlier 'one of the worst deals ever'.

Iran promised in 2015 after negotiations with world powers to build its own nuclear program in exchange for revoking international sanctions. "If we can confirm that Iran adheres to the agreement, and if we can determine that it is in our interests then we must of course stick to it," Mattis said on the agreement.