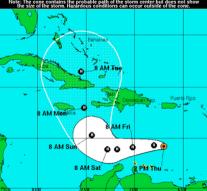 - Matthew raging hurricane with winds of about 120 kilometers per hour along Curaçao. Earlier on Thursday, the hurricane did the Caribbean already, with floods and landslides as a result. Also, airports were closed and many residents holed up in shelters. On the volcanic island of St. Vincent someone was killed.

The expectation is that Matthew further increase in power, to wind speeds of around 160 kilometers per hour and runs northwest to Jamaica, Haiti and Cuba.

The government of Curaçao decided Thursday's elections for a new parliament, which were scheduled for Friday, postponing until Wednesday. Continue to the island Friday all schools closed. Also announced to close several companies to their doors. Residents were sure to keep sufficient supplies and home advice.