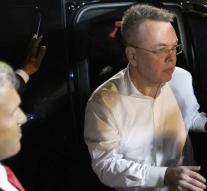 istanbul - After the release of the American preacher Andrew Brunson and his departure from Turkey, the presidents of Turkey and the United States can get together again through Twitter. Brunson, who was held in Turkey for about two years on suspected ties with terror organizations until Friday afternoon, was at the center of a serious dispute between Ankara and Washington.

Donald Trump tweeted twice on this subject on Saturday and thanked President Recep Tayyip Erdogan for his help. The 'great appreciation' of the US could lead to 'good, perhaps very good relations' with Turkey. He stressed that no agreement had been reached in advance about the release of Brunson.

Erdogan tweeted: 'Dear President Donald Trump. As I always emphasize, the Turkish judiciary has issued an independent judgment. I hope that the US and Turkey will continue their cooperation, as befits two allies.

After Trump had imposed sanctions and penalties on Turkey in the summer to free Brunson, the Turkish national currency collapsed the lira. Erdogan spoke of an 'economic war' and called Trump a 'powerhouse. '