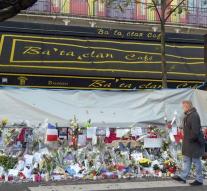 - The French secret service know who was in charge of the bloody attacks in Paris in November, but the name was not released. French media reported Wednesday that the head of the DGSE foreign intelligence, Bernard Bajolet, has told a committee of the French parliament known who was in charge, but Bajolet did not want to lose.

The Belgian Abdelhamid Abaaoud was certainly not. He had claimed Bajolet have a coordinating role, but not the lead. Bajolet spoke in May with the parliamentarians. He did not say whether the identified leader of the suicide bombers is still alive.

When the series of bloody attacks on November 13, with most offenders also perished, lost 130 casualties life. Abaaoud 18 November in the Paris suburb of Saint-Denis slain by police.