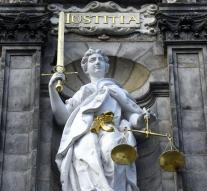 breda - The 45-year-old master swindler Sunny L. from Moergestel was sentenced by the Breda District Court to three years in prison for defrauding large-scale enterprises. The prosecutor had demanded four years.

L. has long been engaged in a cat and mouse game with justice. Together with his 43-year-old wife Simone van der W., he would have ripped through several businesses between 2007 and 2011 other companies for millions. He persuaded to show them false orders.

According to the court the man by his actions undermined the confidence in trade and allow enterprises into financial difficulties.

So he ordered for 250 000 in chocolates and a half million of drugstore products that he did not pay. His fake company and companies included El Toro, Primo Passo and Van Lokven Holding. He was a Spanish teacher.

Sunny L. often passed in the TV programs Detection Verzocht, Lit and Undercover in the Netherlands. A duped company had recently put all five million seized at the home of the couple in Moergestel.

The trial of L. lasted long because every time he fainted during previous hearings. He would have some kind of epilepsy.\n  \n  \n   advertisement

After he just went by with lights was released in 2011 pending his trial. He must do again soon appear in court.