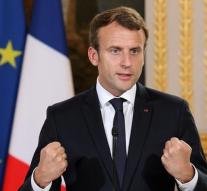 paris - In France, the unions try to lay public life on Tuesday with strike action. The federations, with a total of 5.4 million members, want to enforce their demands against the plans for reform of the labor market of President Emmanuel Macron.

Macron announced these measures after his election victory. Measures that can be most objectionable are the easing of dismissal and reduction of payment in case of illness.

The federations in the education and aviation sector have already announced that they will participate. It is expected that about 30 percent of total air traffic will fall to and from France. The Dutch airline Transavia has deleted some of the flights to France and warned customers for delays.

There have already been more than ten strikes this year. These were a lot smaller than those announced today.