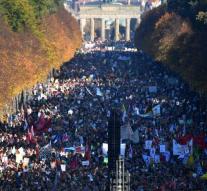 berlin - In Berlin, according to the organization of a demonstration against racism, about 240,000 people went into the state. That is much more than the organization had expected, because in advance only 40,000 people had signed up. The police did not want to say anything about attendance figures.

When the first demonstrators had already reached the Brandenburg Gate, the latter were still on Alexanderplatz, more than two kilometers away. The end point was the Siegessäule (victory column) in the Tiergarten, where the protest was concluded with performances by various musicians.

'We are incredibly satisfied with the turnout,' said Felix Müller of the organizing German action groups under the name of Indivisible. 'This confirms that many people want to send a signal against the right and for solidarity. '

Under the motto For an open and free society- solidarity instead of exclusion, the alliance had called for the protest. The demonstration is aimed at the right-wing incitement, discrimination, the drowning of refugees in the Mediterranean and cuts in the social system.