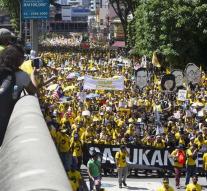 KUALA LUMPUR (Reuters / DPA)- Thousands of Malaysians are Saturday in the capital Kuala Lumpur took to the streets to protest against the government of Prime Minister Najib Razak. The mostly in the yellow-clad protesters demanded his departure because of a major corruption scandal.

During the reign of Razak, an amount of about three billion disappeared from the state fund 1MDB. The millions of his personal accounts he thanked in his own words in donations from Saudi Arabia. Prosecutors in Singapore, Switzerland and the United States to investigate the suspicious money flows.

The massive protest was organized by Bersih 2. 0, the alliance of free and fair elections. The top women of the movement, Maria Chin Abdullah, Saturday was arrested because she would have accepted financial support from abroad.