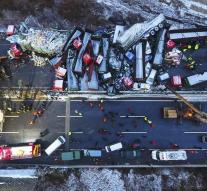 - In massive pileup, 17 people died in the northern Chinese province of Shanxi, and 37 injured. In the accident Tuesday (local time) were 56 cars involved. The pileup occurred during bad weather, including freezing rain.