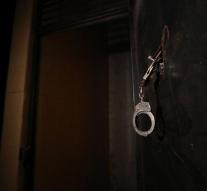 damascus - Syrian state prisons in the past five years, an estimated 17 723 people have been killed by torture, beatings and disease. That concludes Amnesty International in a report published Thursday.

Former detainees told Amnesty about conditions in prisons. So many prisoners were beaten on arrival at the detention center with metal pipes or electric cables. It would also guards 'security' seize prisoners, especially women, to sexual abuse.

One of the prisoners outlined how people suffocated because the ventilation collapsed in their cells.,, They kicked us to see who was still alive, '' said the former detainee. Seven bodies were left in his cell.


Amnesty gave prisoners have been on little food and water. They could hardly wash and they are often not given the necessary medical care.,, These poor conditions have contributed to the high mortality rate in Syrian detention centers since 2011. ''