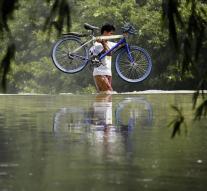 - Hundreds of thousands of people in eastern China have left their homes because of the arrival of typhoon Nepartak that Saturday came ashore in Fujian province. The storm accompanied by strong winds and heavy rains.

The typhoon came just before 14. 00 am local time on land, with winds of 100 kilometers per hour. In the city of Putian fell more than 250 millimeters of rain in the morning hours in four hours. Certainly 420. 000 Chinese have been evacuated from four cities, including the provincial capital Fuzhou. More than three hundred trains, four hundred flights and 5,000 buses have been canceled.


The typhoon did before Taiwan and was even more powerful. Three people died in Taiwan, more than three hundred were injured.