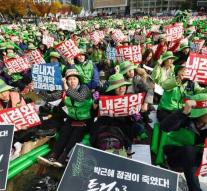 seoul - Tens of thousands of South Koreans argue Saturday in the capital Seoul against President Park Geun-hye. According to local media certainly 170,000 demonstrators on the road, which is a record, according to the police that is plucked with 25,000 men.

Numerous agents are trying to keep the demonstrators from the Blue House, the residence of Park. The leaders of the protest estimate that a million people participate in the demonstration.

Park is embroiled in a corruption scandal that has unleashed a wave of protests. It is the third consecutive Saturday that South Koreans protest against their president.