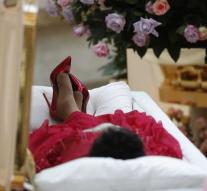 - The coffin in which Aretha Franklin is located, has just arrived at the Charles H. Wright Museum of African American History in Detroit, accessible to the public. The deceased queen of soul will stay there for a few days and people are already queuing en masse.

Masses of people swarm across the street and the lines are getting longer and longer. Everyone wants to catch a glimmer of Aretha and show a final honor to the legendary singer. The chest in which the singer's body was lying was open. Flowers stood around the coffin.

At 08.00 hours local time, one hour before the first interested people were allowed to come in, there were already about two hundred people waiting. A number of fans slept on the sidewalk of the museum last night. When Aretha's niece Chrystal heard that, she decided to bring water and hamburgers to the fans. 'She wanted to thank us on behalf of the family,' said one of those present. The people who want to give the Queen of Soul the final honor come from all over the country, at the Detroit museum there are fans from Las Vegas, Austin and Miami.