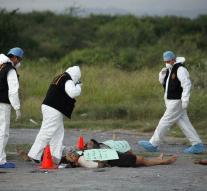 - Gunmen on Saturday caused a massacre in a house in northeastern Mexico. They shot according to local authorities, eleven members of a family dead in the city of Ciudad Victoria.

The authorities suspect that the shootings are the result of rivalry between gang members. According to security experts, the city is the scene of fighting between different groups within the notorious Zetas drug cartel.