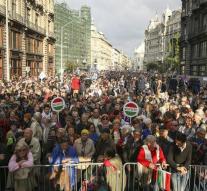 budapest - In the center of the Hungarian capital Budapest on Sunday, thousands of people demonstrated for freedom of the press. Following the sudden lifting of the opposition newspaper Nepszabadsag last week. This newspaper revealed regular corruption scandals involving the right-wing government of Prime Minister Viktor Orban.

The protesters accuse the prime minister that he will not tolerate critical press. In this way, would the corrupt practices of his family and the government can continue undisturbed.

An investor of the opposition newspaper Nepszabadsag said lifting the newspaper was necessary because the losses. But former employees stated that there was indeed a political motivation to increase and that the paper would be bought by an oligarch who stands at the side of Orban.

The demonstration was organized by some liberal and leftist opposition parties.