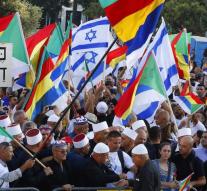 tel aviv - Tens of thousands of people have demonstrated on the Rabin Square in the Israeli city of Tel Aviv against the controversial law that Israel officially designates as the homeland of the Jewish people. The Forum of Druze Army officers had called for the protest.

The Israeli parliament adopted the law that emphasizes the Jewish character of the country last month. The law also states that a 'united Jerusalem' is the capital and Hebrew is the official language. Arabic lost the status of official language.

According to critics, including Jewish Israelis, minorities are disadvantaged by law. Arab Israelis, who make up about 20 percent of the population, said about the law that 'we will be second-class citizens forever. 'Another parliamentarian spoke about' the death of democracy. '

About 130,000 of the approximately nine million Israelis are Druze. Their religion originated from Islam. In contrast to Muslims and Christians, Druze do serve in the Israeli army.