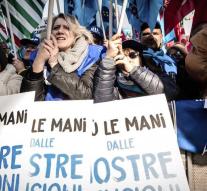 rome - In Rome, tens of thousands of people have taken to the streets to make a fist against the Lega-Five Star Movement government. Until this protest was called up by left-wing organizations.

The demonstrators called for more equality, demanded the right to work and protested against racism. An official number is not yet known, but local sources speak of as many as 200,000 demonstrators. This makes it the biggest demonstration in years.