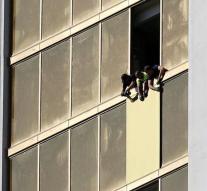 las vegas - Prior to Stephen Paddock from his hotel room at a music festival in Las Vegas, he first shot a guard at the hotel. That made the police aware of a new timeline of the events.

Paddock shot the guard in his leg in the hall on the floor of his hotel room. That was six minutes before he opened the fire on the visitors to the music festival. Possibly he could see the guard by cameras.

The police initially assumed that Paddock ended his action when the security guard approached him. But now it appears that the guard had been shot before. So why Paddock eventually stopped shooting is unclear.

Agents found the injured security officer as they stormed toward the hotel room. Shortly before the police invasion, the shooter committed suicide.