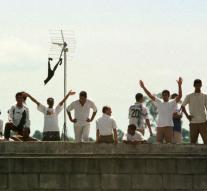 - In a revolt of prisoners in a Brazilian prison Monday escaped a large number of prisoners. The military police reported that fled between 200 and 300 people. The management of the prison spoke of 55 escapees.

The reason for the uprising da Rocha in the detention Franco in São Paulo state authorities have made no announcements. Detainees founded several fires in the psychiatric ward of the prison. In the chaos that arose subsequently, managed to escape a large number of prisoners to an adjoining forest.

Sunday 25 were killed in fighting between rival groups in the prison of Boa Vista in northern Brazil.