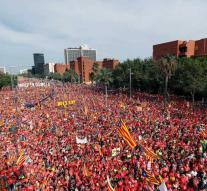 barcelona - On the 'national' holiday of Catalonia, hundreds of thousands of separatists met in Barcelona in a 6-kilometer parade.

In addition to Catalan flags, they also carry banners on which the independence and release of imprisoned separatist leaders is demanded. According to a department of the local police, nearly a million people are on their feet on Tuesday.

The region is in a political crisis due to an illegal referendum last year about independence. The then regional government of the separatist Carles Puigdemont left it and claimed independence. In the ballot box that was organized by separatists, more than 40 percent of the voters entitled to vote cast a vote, mainly separatists.

It caused a political impasse and caused great economic damage to the region. The central government in Madrid seized October 28 last year. Puigdemont and a series of Catalan ministers fled the country. A number of former ministers are stuck. Since May, Catalonia has headed another regional government with the extremely radical separatist Quim Torra. He was elected by 66 votes in favor and 65 to prime minister by the regional parliament.