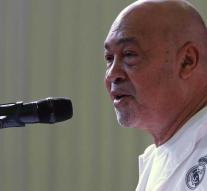 paramaribo - The Surinam martial council dealt with the latest cases in the trial of the December murders on Friday. It is not yet known when the president of this court will give judgment against the seventeen suspects. Twenty years were demanded for eight suspects and for the other nine the prosecutor asked for acquittal.

In the December 8 trial it is all about the murder of fifteen prominent Surinamese in December 1982. The prime suspect is the current president of Suriname, Desi Bouterse. In 1982 he was leader of the then military regime. Twenty years in prison have also been demanded against him.