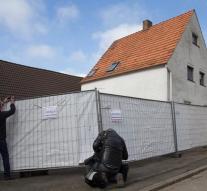 paderborn - The German 'torture-couple' Angelika W. (47) and Wilfried W. (46) Wednesday first appeared before a judge. The divorced duo is accused of holding and torturing several women. At least two women (33 and 41) would be in the hands of the couple have fallen and tortured to death.

At the court in Paderborn Angelika shielded her face with a big pink folder. Her ex-husband moved without shielding the hall. The two were in the same dock, with a security guard between them. There is a lot of media interest in the horror business.

According to German media, the suspects would have not only abused the victims, but also extorted. Investigators prosecutors met with some 100 000 euros would come from victims. On the first day of the trial, the case was not examined as to substance.

During a search in the horror house were found about twenty mobile phones, both owned by victims of the suspected perpetrators. One of the telephones is of one of the two dead tortured women. After her death are still sent text messages to the device to mask her disappearance.