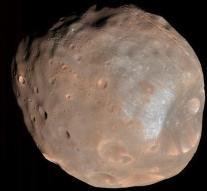 - The planet Mars is one of its moons in pieces to the cracks. On the surface of Phobos stand for long fault lines. These form the beginning of the end. Probably the moon thirty to fifty million years to live, for space concepts rather short.

Phobos is only 6000 kilometers of Mars. In comparison, our moon is more than 360 000 kilometers from Earth, sixty times so far. Mars Phobos draws to itself, with about two meters per century. " We believe Phobos already falling apart. The first sign of this, these cracks ", the space agency NASA said on Tuesday.

Phobos is about 11 kilometers in diameter. The moon is made from inside rocks, surrounded by a layer of powder of about 100 meters thick.

Triton, one of Neptune's moons, has the same cracks and is also slowly pulled his planet. In a few billion years the moon will pass away, expect scientists.