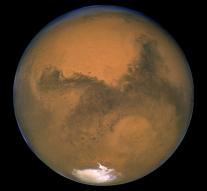 - Mars lost its atmosphere by strong solar storms. The reported US space experts from NASA Thursday. Their conclusion is derived from information provided by the MAVEN spacecraft circling around Mars.

The solar storm cause a climate that led to the erosion of the Martian atmosphere, set NASA scientists. In late September they did revealed that on Mars is almost certain liquid water.