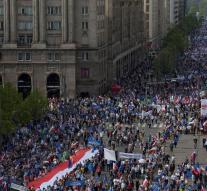 warschau - Between 10,000 and 20,000 Poland demonstrated Saturday in Warsaw against the Conservative, Eurosceptic Policy of the Rule of Law and Justice (PiS). The 'Mars of Freedom' was the biggest demonstration in months that managed to get the opposition led by the Burger Platform (PO).

'We are looking for a democratic Poland, for a European Poland, for a proud Poland who seeks friends and partners, not enemies in Europe like now,' said PO leader Grzegorz Schetnya against the Polish and EU flags swinging crowd.

The European Union strongly criticizes changes that the PiS government wishes to implement in the constitutional court. There is also criticism from Brussels on strengthening government's grip on public media.

PiS leader Jaroslaw Kaczynski said freedom in Poland is not at all at risk. 'Who claims to march in the name of the opposite,' he said during a visit to the port city of Szczecin.