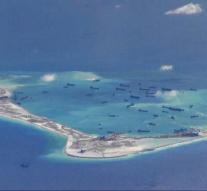 washington - An American navy ship has conducted an exercise on Thursday in the territorial waters of a reef where China has built an artificial island. That told US officials.

With the 12 nautical mile offshore exercise, the US wants to show that they do not recognize the territorial borders in the waters as China has determined. The battlefield USS Dewey therefore held an exercise as if a man had been abducted at the Mischief Reef, part of Spratly archipelago. China changed the reef in 2014 in an island. China responded to the practice.

Earlier, American ships carry without stopping within the territorial waters of artificial islands.