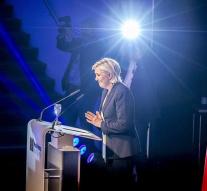 koblenz - Marine Le Pen, the presidential candidate of the French National Front, the rise of right-wing parties in Europe sees as the response of citizens to the dictates of the liberal elite. After Brexit mood in Britain and the victory of Donald Trump in the presidential elections in the US in 2017 'the year of the awakening of the peoples of Central Europe.'

The phase in which nationalists in Europe to the fringe groups were over, Le Pen said Saturday at a congress of European right-wing populist movements in Koblenz. 'We are experiencing the end of a world and the birth of a new,' she said. In the coming election year in the Netherlands, France, Italy and Germany, the aim is to achieve a majority, according to Le Pen.

It was the first time that Le Pen was speaking in Germany. According to opinion polls in France, they will definitely get the second round of presidential elections in her country. At the meeting in Koblenz speak Geert Wilders of the Freedom Party, Matteo Salvini Italian party Lega Nord and the leader of the right-wing populist party Alternative for Germany (AfD), Lynda Petty.