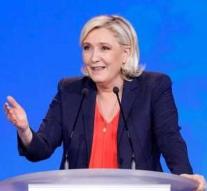 luxembourg - Marine Le Pen, the figurehead of the French National Front, has to repay 298.497 euros to the European Parliament because, between 2010 and 2016, she wrongly paid an employee of her party with EU money. The Court of the European Union determined that.

The parliament had reclaimed the money after an investigation by the European anti-fraud agency OLAF. The former presidential candidate (49) then went to court in Luxembourg. However, according to the judges, she was unable to show that the assistant actually did any work for her in parliament. That this would have been there is not enough. Furthermore, Le Pen did not prove that the employee lived in Brussels.

Le Pen had claimed that the accusation is politically motivated. The judges rejected the claim that the parliament discriminates against its party. There are still a number of similar issues. The parliament had already withheld part of Le Pens salary and allowances. She has not been a MEP since last year.