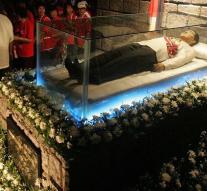 - The former Philippine dictator Ferdinand Marcos (1917-1989) Friday with military honors reburied at the so-called hero cemetery in the capital, Manila. Many inhabitants of the Philippines were shocked and angry that the Marcos' family had kept the time of re-buried secret.

'Like a thief in the night', Vice President Lenie Robredo described the ceremony. 'This is nothing new for the Marcos family, with its hidden riches hidden human rights violations and now a hidden burial with no respect for the law,' Robredo said.

President Rodrigo Duterte had given its consent to the reburial. Thus he solved in an election promise. The Supreme Court had rejected objections from, among others, human rights activists.

Marcos ruled from 1965 until 1986 with a hard hand over the Philippines. Tens of thousands of communist rebels and other opponents said during his reign death. Marcos died in exile in 1989. After his death, his body frozen.