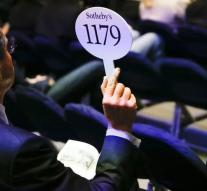 - Through the Chinese life insurer Taikang Life has a family of Chinese dictator Mao Zedong took a stake of 13.5% in the British auction house Sotheby's.

The Chinese insurer $ 5 billion under management bought for $ 230 million over eight million shares of the legendary auction house, as it turned out a notification.

In the management of Taikang Life's founder Chen Dongsheng, via a grandson akin to Mao. His entrance marks the rise of Chinese money in Europe and the United States.

Recently, many works of art sold to China's high net worth individuals and companies. Sotheby's would have a market value more than $ 2 billion.

Taikang Life is like Chinese Anbang Life busy expanding in Europe, Anbang fell with his purchase of the Waldorf Astoria Hotel on. In March, it still offered on the Starwood Hotels.

From January to June, Chinese companies for $ 120 billion in purchases done.