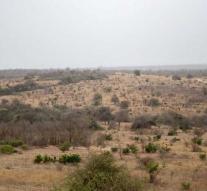 johannesburg - 36 pupils are pregnant at a secondary school in the northeast of South Africa. The girls are between fourteen and eighteen years old, says spokesman Neil Shikhwambana of the Ministry of Health of Limpopo province.

Teenage pregnancies in South Africa are common. Especially in rural areas such as Limpopo. Across South Africa, about 15 percent of all women have at least one child before they turn nineteen.