Home / World / Many reports of racism after election Trump 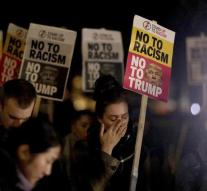 - Since the election of Donald Trump Tuesday there are many stories published in American media- and social media- racist incidents. In some cases, those called it racist ethnic minorities Trump bejegenden by name.

Some stories on social media are difficult to verify, but many people also place pictures as evidence. 'Fuck you, nigger,' was painted on the windows of a car, was shown in a video on Twitter. At a university in New York, someone wrote on the door of an Islamic prayer room 'Trump', CNN reported. Students from among more Minnesota put pictures of toilet doors with lyrics like 'Only for whites' and 'Go back to Africa. '

A Muslim student on her way to her car was confronted in San Diego by two men who called Trump by name. 'Comments were made that indicated that they had coined her because of her Muslim faith, including the wearing of traditional clothing and a hijab,' said Director Elliot Hirshman San Diego State University. The men grabbed her purse and took her car keys out. When the student was trying to find her car after she had called the police who disappeared.

North Carolina was racistishe graffiti found on a wall. 'Black lives do not matter and so is your voice,' was on the wall in Durham. Philadelphia stood on a window pane in a shopping the words 'Sieg Heil 2016' and 'Trump' with the letter T in Trump was replaced by a swastika.

Parents of children at a school in Southern Lehigh in Pennsylvania received a letter from the director in which a number of incidents described. Students who 'nigger' in calling the hallways, black students who are denounced as 'cotton pickers' Toilet doors with swastikas carved into it and students who bring the Hitler salute and shouting 'Heil Hitler'.

It was not only by racism. A gay couple in North Carolina found a letter on their car. 'Can not wait for you 'marriage' is destroyed by a real president. Gay Families = burn in hell. Trump 2016. '